I've painted myself into a state of complete and utter boredom!!
To come to the horrible realisation that I just do not have the required skill, or patience to paint a complete army. I cannot lower my standards to do a "wargames" paintjob, I've tried, and just keep on looking at the figures, then adding a bit here, and adding a bit there, four hours later I have painted the faces on four figures, and blocked in the uniform colours!
This week has been spent looking at the figures laying about on the desk, and thinking awwwh bollocks to all of this.

So I've gone back to some plasticard butchery, because I have something that just has to be finished. It has sat on the shelf looking somewhat forlorn, but has now claimed its rightful place back on the desk of doom. 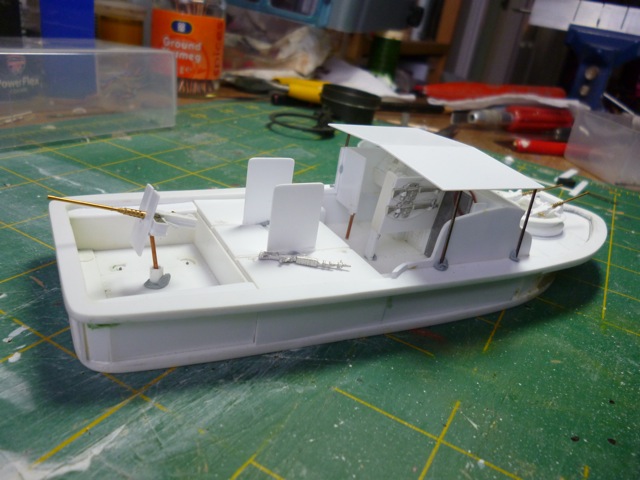 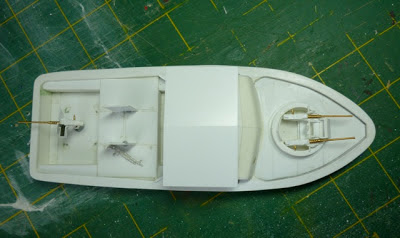 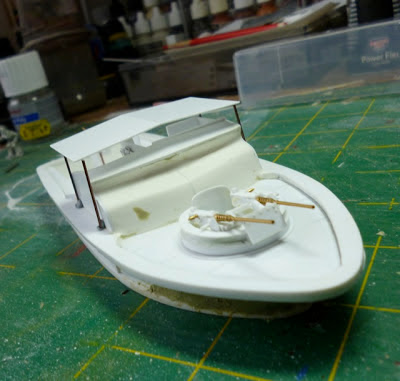 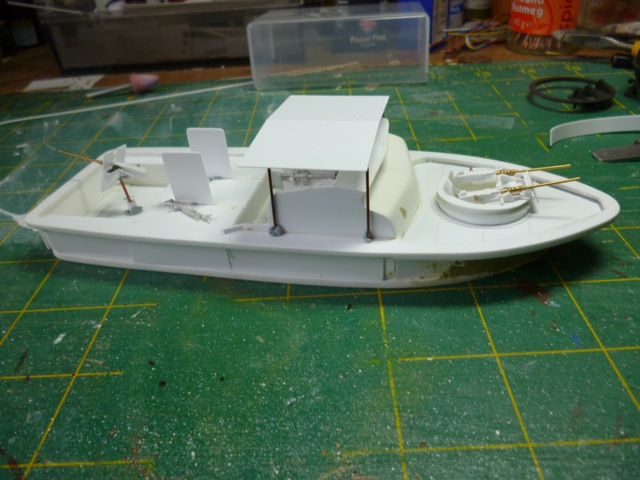 The problem now is, do I keep it just for me, or do I ,once again face the morons, who will criticise the scale, the model and everything else, and get the damn thing into a mould, and cast for sale?

Afficianados of this blog will be familar with the constantly shifting vista, that is my work desk.
After reviewing my financial situation (see previous post) I have delved into the boxes under the desk, and resurrected the following items for my attention. 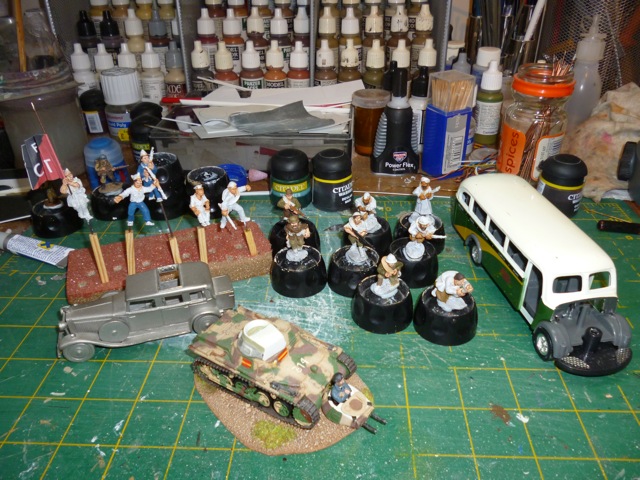 what follows is a quick breakdown of each item, and what work will be attempted on them!! 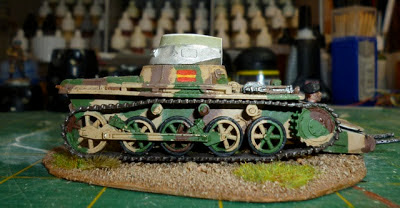 Breda turret for the Panzer 1A, free from the constraints of making it castable, this will hopefully turn out to be a nicely detailed model of the upgunned little tank, and looking at the paintjob on the model, I shall be returning to it with a selection of weathering materials to give it that "battered about" look. Its far too clean at the mo!!!
Next we have 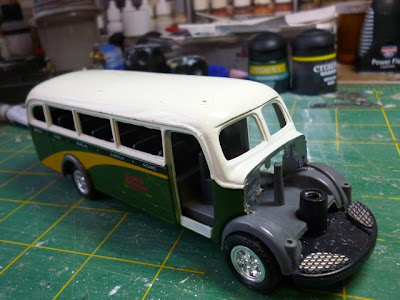 The much used Autobus, this was a Chinese diecast model of a 1950's Mercedes bus, I have hacked off the front end, so I can remake a much more 1930's looking bonnet, and mudguard section. The idea being, that I can use the remade front section to make a silicon mould, and cast myself some more, to convert the other four buses I have stashed away. I also have a selection of seated figures, that will also get moulded, so i can fill them with a suitable selection of dodgy passengers.
The original bus model was 1/55th scale, and fits in perfectly, reguardless of what other folks might say, with the figures I'm using.

Moving along, next in line 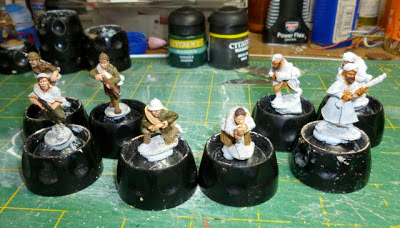 The desk is  not complete, without a selection of figures, in various stages of completion. This little bunch consists of three Moroccan Regulares, and an LMG and Mortar support for the International Brigade unit. 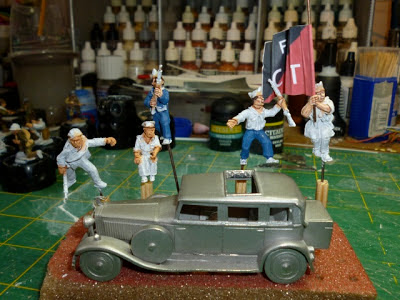 The Hispano-Suiza lead car for the Militia Columna, this little selection has been on, and off more times then Katie Price's knickers!!
I am determined to get this model finished, the crew all hang off in various places, and it will get covered in the usual selection of graffiti found on these vehicles.

Thats it for now folks, more as they get done!!! 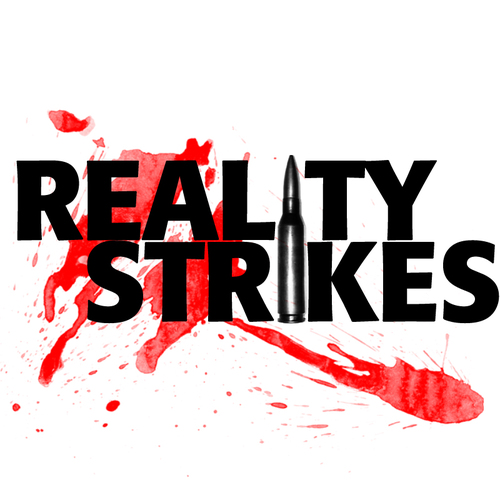 Much as I like to flit from one unfinished pile of tat, to another................The harsh reality has finally hit home, I simply canot afford to buy anything else on a grand scale :-(
In real terms, my wages have not increased, whereas everything else has!!! Belt tightning is the name of the game now, I reckon I have about £20 per month I can realistically spend on the hobby, plus anything I can make on the side, by flogging off the piles of dead lead I have laying around.

I have the capability to make a lot of my own stuff, especially on the vehicle and terrain front, so the project list will concentrate around this area.

I have enough figures stockpiled to finish the Pyhrric army, and plenty of lead from my Anglian days.
I have looked into putting together a website to introduce the SCW to the gaming masses, and help point interested parties in the right direction. I also have the beginnings of a set of period lists for the Bolt Action rules, that I shall make available once finished. So thats me sorted for a few months.

For interested parties, this month's £20 was invested last night, in the shape of four pink polyboards from B&Q, they are currently on offer in the Gt Yarmouth store at £5 a pop, which ain't too bad at all.
I have been out on relief, covering another  Barclays branch for work, and I get paid travel money for this, I have calculated that after fuel costs, I have another £10 to play with, and shall be picking up another two of the boards, that should give me enough for the table size I want to put together.

The desk will be cleared today, and the project resurrection will begin with my Spanish Civil War stuff. Guy Bowers, the editor of Wargames Soldiers and Strategy magazine has offered me the chance to write an article for the publication, something SCW based, which hopefully, will give me the extra boost I need to do some more work on my collection.
Also going to get my arse over to New Buckenham, with the SCW stuff, and arrange another Bolt Action game, with a few rules additions, and army lists to try out.

The aim now being to construct a demo game to take over to the  Partizan show, no idea which one, but I think the first show at the beginning of June, is a bit too early for me to get the game sorted by then, so September looks a realistic option.

IF YOU SEE ME GOING OFF ON ANOTHER FLIGHT OF FANCY, TELL ME TO STOP!!!
Posted by NigelH at 01:25 5 comments:

I made the mistake of purchasing some more figures from Aventine, just a couple of odd bits to finish of the Pyhrric army. Now these couple of bits cost me a fair bit of wedge, and looking at what I got for my hard earned wonga, I decided to look at smaller figure sizes in an attempt to save myself a bit of cash!!! 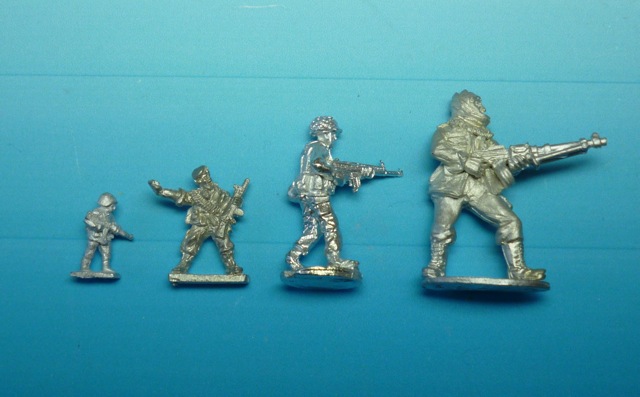 My next mistake, was looking at the Braille scale forum on Missing Lynx http://www.network54.com/Forum/47210/  Ohhhhhhhhh look, 20mm, now thats a decent scale, and depending on the period, there are some decent choices around. I was thinking WW2, but the lads at New Buckenham have 15mm, 6mm, 20mm and 28mm WW2, so its a no go really. Then I saw this. 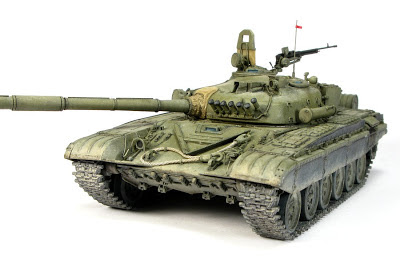 A rather stunning T-72 by Alex Clark, yes it is 1/72nd scale!!
Aha, thinks me, how about a nice Cold War goes Hot collection? Plenty of decent kits in Plastic, Resin and Metal, options for me to do a bit of scratching too, just need some figures to go with them.
Over to Google Fu, and I find this little company, who appear to have some of the stuff I'm looking for
http://elhiemfigures.com/index.html

A couple of sample packs could do no harm, surely? 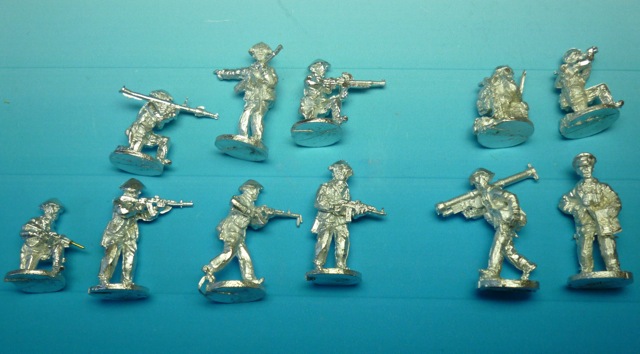 So, I get myself some National Volksarmee figures ( East German army) from the WARPAC range, 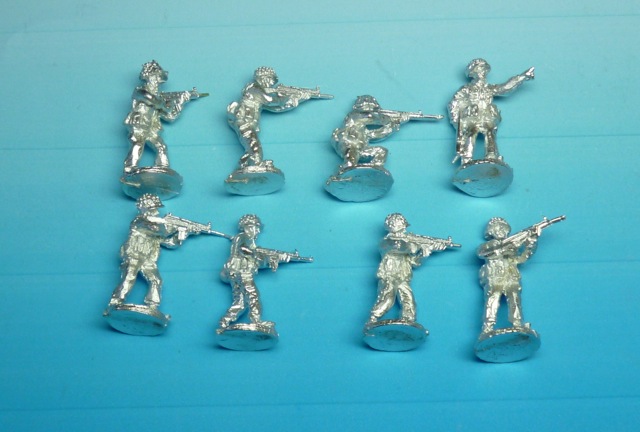 and, some Bundeswehr (West German Army) from the NATO range
Both sets are for the 1980s period, and I'm thinking around 1982 to 1989 as the basis for what I want to do.
Lets have a quick review of the models themselves. Gamers call this size of figure 20mm, these lads are not 20mm, they are 24mm from the soles of their feet, to the tops of their helmets. This makes them a good 1/72nd scale height.
They are really quite good, in fact I would go as far as saying, they could knock spots off some of the 28mm ranges around. A good selection of sensible poses, and just about enough variations to make up a full section of different models. The NVA lack any heavy weaponry, and I would have preferred a PKA as the squad support LMG, but beggars can't be chosers.
The guns on these models are quite flimsy, and I have had to replace two gun barrels already, not a deal breaker for me, but it could be frustrating for cack handed gamers with no modelling skill. However, if the weapons were thicker, it would ruin the overall effect.
The models are well cast, with a minimum of clean up required, the metal used is quite hard, and not too pliable ( henace the broken barrels)
Proportion wise, they are bloody lovely, none of your overweight fat lads here!! They could even fit in with some of the plastic ranges from the likes of Revell and Zvesda.
Overall, if you are looking for suitable figures, for the modern period, in 1/72nd scale, then I would heartily recommend having a look at their ranges, there is a lot of good stuff to choose from in it.

Now I have a bit of light reading to do 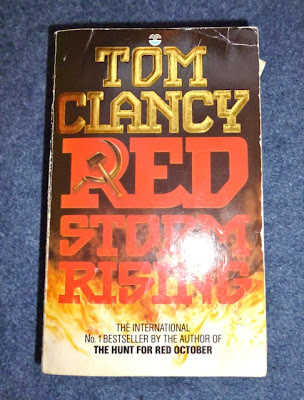 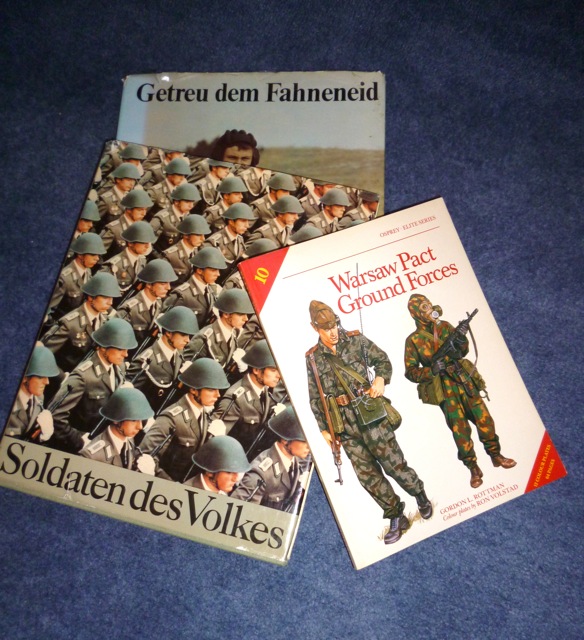 and, then its off to the various discount model kit providers on t'internet, for the purchasing of some plakky kits for me to arse about with.
Found some Le0pard1+2s,T-55s, BTR60s  and T-72s already, and have started to scratchbuild a backdated 1A2 hull for the Revell Marder 1A3, that I shall cast up for myself, and use the other kit bits to detail.
Next off, I shall order some Soviets, and BAOR models from Elheim, and some nice resin FV432s and BMP1s from Cromwell Models