The Return of the Idiot

It seems like an age, since I posted anything, of any relevance, on here......
Life has an unfortunate way, of placing various obstacles into your path, and before you know it, months have flown by, dust and cobwebs have settled into place, so with some trepidation, I brush them away, and settle down to try and breath a bit of life back into my poor old neglected blog.

So, what wonders have passed across the Desk of Doom? Well, to be perfectly honest, not a lot, as usual with me, I have drifted from one thing, to another, with odd figures, have been finished, and bits of plastic tortured into various shapes, and welded together with liquid poly.
In need of some inspiration, I decide to head off to Partizan.
Now it would not be me, if there was not some dumb arse drama issue involved, and after arranging to pick up a couple of mates, a spanner gets thrown into the works, now being the dad of a special needs child, I have a certain level of responsibility, we are currently in the middle of the school summer holidays, and trying to fill up a day, for an autistic 17 year old, who does not like other children, crowds, loud noises and dogs, is really hard work, and my poor wife manages this, on her own for most of the week, so when I am not working, at the weekends, I take up the slack, and give my poor wife a break. So, to take the best part of a day out of the weekend, is a big deal for me, and after agreeing that it would be ok to go, my wife decides to change her mind!!
Some intense 11th hour negotiations take place, and we finally reach a compromise, and I get a leave pass to head North to Newark 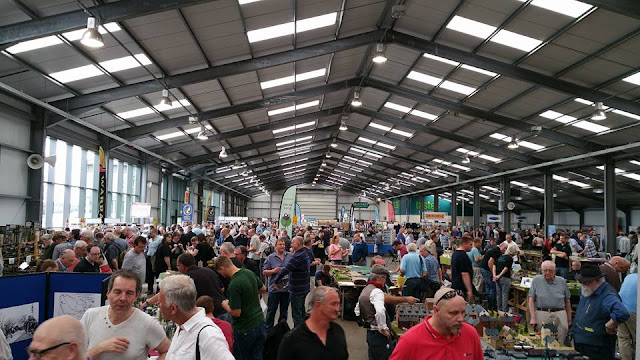 Partizan has moved house, and its shiny new venue, is the George Stevenson Hall, located on the Newark Showground, for those of you who can recall the gloom of Kelham Hall, the blinding lightness of this great new venue, may have come as a bit of a shock.
The intrepid threesome, roll up, and pay their dues, for the princely sum of £4, we are granted entrance, and are handed a nice little figure as well ( some sort of Crimean war nurse it seems).
The new venue is lovely, light and airy, loads of room to stroll about, the stalls go around the outside, and the games take up the centre space.
The games themselves are split into two zones, Demonstration, and Participation, so at one end you can join in and chuck a few dice, and at the other, you can marvel at the set ups from the Demo game crowd.
Loads of choice on the trader front, with the usual culprits, from the Kelham days, and a few new faces, so money will more than likely be spent, with one of our gang spending more than the other two added together.
I spent most of my day, generally chatting, with assorted mates, it did me a massive power of good, to go to the show, sometimes you get stuck in a bit of a rut, and I needed a kick up the arse, to get moving again, and to start enjoying this hobby again.
Now I would like to tell you about all the games, but to be honest, I did not have a camera, and I really did not spend  alot of time looking at them. There were some lovely looking games on show, and they all semed to uphold the usual high standard you expect to see at Partizan.
My spending was minimal, just a few packs of figures

From UnderFire Miniatures, I picked up his latest Bundeswehr releases, and a few additions to my DDR NVA collection, I will do a review of these at some stage, as they are my current favourites, in my period of choice (at this moment in time)
A token pack of Spanish Civil War Republican infantry from Empress Miniatures, my enthusiasm for this period has somewhat waned, and I really don't know why.
So, not a huge amount of cash blown by me.

Now, keep your eyes peeled, because, this blog is going to turn into a VLOG!!!!
Yes, I am going live action, so instead of reading the drivel, I type on here, you can see moving images, and listen to my dulcet tones, as I cover a number of different topics, from  miniatures reviews, to "How to's", so if you ever wondered just how I can waste the best part of an hour, painting a face on a figure, you can bore yourself stupid watching me do it.

Oh the horror of it all

Since I last typed any sort of nonsense on here.
I am still around, just not done much worth sharing TBH, at the moment I am working on a charity build, having taken on the Tank Girl Tank for The Frothers Charity Figure thing from a couple of years back. Hope to have the finished model squared away for Partizan on 21st August.
Apart from that.........errrrrrrrrrrr..........yeah.
Boring old git these days.
Posted by NigelH at 04:56 2 comments: