Yes, I have the attention span of one!! 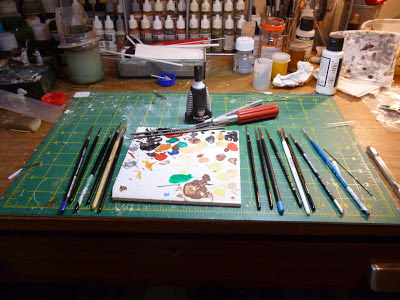 
I've found myself flitting from one bloody project to another, and have got absolutely nothing to show for it.

1) French and Indian Wars- One semi finished Indian, a shedload of unpainted lead

2) Polish Renaissance- Two Winged Hussars started, struggled manfully with them for, oh about half a day.

3) Spanish Civil War-At least I have enough stuff painted for a game, but another pile of unfinished figures and vehicles.

4)PBR Scratchbuild- Now on hold until I get some kind of fume extractor, after geting the worst headaches ever from the glue!!

6) Dux Britainorium- Handful of saxons painted, I do have a painted Romano-British army, but it needs tarting up, because I am such a sad bastard and can't use it as it is.

I blame some of this partly on being depressed. I feel a bit better when I get into a new project, the excitement of ordering some new figures, and researching the army. This tails off when I suddenly realise just how much work I have to do.

I have to draw a line under all of this madness, I've cleared my desk, in preparation to just concentrate on one of my many projects

This might give you a clue which one I have chosen!!