Ok, yes I know, Spain again...will he ever get this project to a decent stage, where it all looks fabulous on the table top?

There is always that distinct possibility, but I have the attention span of a goldfish, and whilst I was quite happily painting some Spanish Foreign legion figures, I made the fatal mistake of "rummaging" and found a discarded Rubicon T-26 model.  Now I had great plans for this little tank, I did an in box review on my YouTube channel, and then followed that up with an in-depth build video, which revealed the defects in the kit, and consigned it to a box under the "Desk of Doom"....hang on I shall blow off a few cobwebs, and revisit that sadly dormant channel, and share the two epics with you all

There you go, a little rewind on the T-26 tale, so lets bring this up to date.
I really wanted to love the Rubicon kit, I had such high hopes for it, and yes, I know most gamers will not give a damn that the kit lacks key details, but I do, I care quite a lot in fact.
Before I was a "serious gamer", I made model kits, and was actually quite good at it, but all the models did was sit on a shelf, and I wanted to relive my boyhood days of battles at the school wargaming club with Airfix soldiers, so I got into gaming...But, you knew there would be a but didn't you!!😂
I also wanted my gaming models to be of the same high standard that my shelf ones were, and that my good friends is not always going to be the case with "wargaming" models.
So I tend to "mess about" with the models, converting, adding, scratching bits n bobs, to make them look the part.
As most of you are aware, I have more than a passing interest in The Spanish Civil War, a few years back I set up a figure company, to produce a range of 28mm figures for the period, and decided to build the vehicle masters myself. First off of my workbench was the T-26, and TBH, I did a pretty good job on it 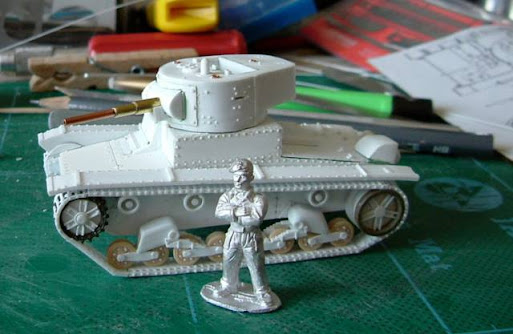 So, I have a fairly good idea of what a T-26 looks like.
Back to the Rubicon kit, it you watch the build video, you get an idea of whats missing, here's a image of some of the pieces I was making to replace the missing parts on the Rubicon kit 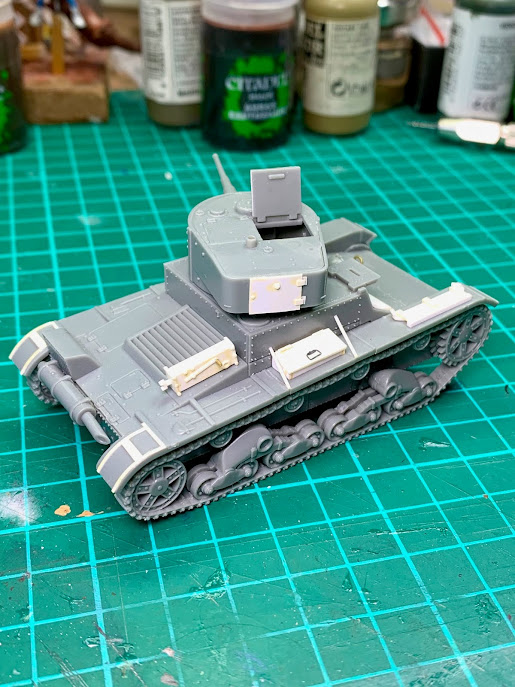 All of the white bits, are the replacement parts required to bring the model up to the standard I wanted, and sadly, there are more bits that need sorting too.
Yes I admit, some of the bits you can get away with, and if you just want a table top representation of a
T-26 tank, then the kit straight from the box will do that for you, but I wanted that little bit more from what was meant to be the best 1/56th scale T-26 around, and felt just a little bit disappointed that simple things like two stowage boxes were not supplied, the kit has just one, or that the door on the back of the turret is not there, and the simple little bits on the rear mudguard, were also omitted. There are other things too, but if I list everything, then it will be seen as being overly picky. I paid £18 for the model, and yes it has a plethora of variants in the box, I feel too much time was spent cramming as many options as possible in, they dropped the ball on the simple stuff.
The model was due to be the star turn in a "How I paint Tanks" video for my sadly neglected YouTube channel, I was so annoyed with the model, that I shelved that idea, and sulked instead.
Days turned into weeks, turned into months, and I lost my model making and painting mojo, until just recently, when I just sat down one day at the desk, and picked up a brush, looked over the clutter of rubbish that sits on the desk, and picked up a forlorn SCW figure, with no intention of doing that much, just to mess with some paint, to see how I felt. That "5 minutes" turned into two hours, the calming influence of just simply painting, whilst listening to some podcasts made me feel so relaxed, I began to enjoy the hobby again.
Then, I found the T-26 box, and this rather idiotic plan began to form on my head..You see also in the box, was another T-26, a hunky chunky lump of heavy metal, bit wobbly, not amazing, but still pretty good 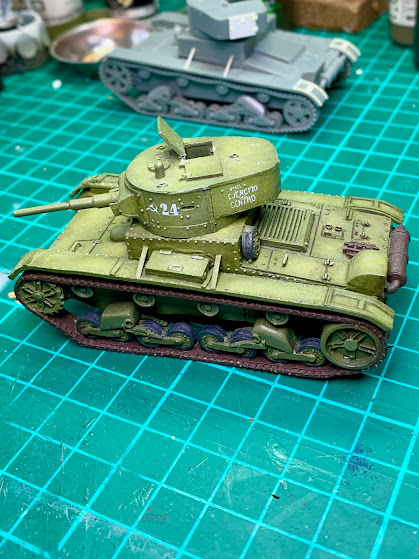 An original Anglian Miniatures casting of my T-26 master, I had thrown a bit of paint on, and then my head had been turned by the Rubicon temptress, in the form of their shiny new plastic kit, and the rather elderly metal model was pushed to one side, but look very carefully, and you can see, it has two stowage boxes, the correct rear mudguard bits, the door on the turret rear is there, it also has the missing saw, the missing spare wheel, the missing spare track links, and the missing periscope on the turret too...its actually not a bad version of the T-26, yes its a little primitive in places, but I did build the master a good few years back, and I have got a little bit better since then...In fact I still have that master in a box somewhere........ 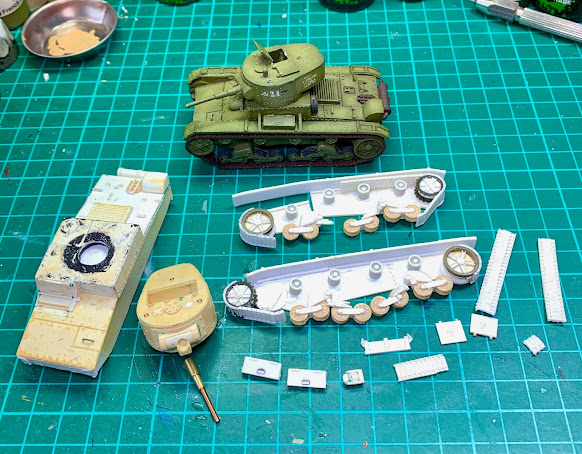 And......There it is, mangled master, and the cast model, I could do a repair job on that...no hang on, I could use some of the more tricky bits, on a new master, and improve on the areas I fell down on........Now thats a good idea for a video or two, build the master again, improve on the tracks, and some of the hull areas I messed up on the original, and maybe, just maybe offer a few limited edition castings, to cover the costs of getting some cast up for myself!!! I could sell the master perhaps, but I doubt very much that anyone would want it...but I really want a top quality T-26, and I think its time I built it
I love it when a ridiculous plan comes together😂😂